Home » Event » Kendo Article » What are the main features of the VDE Plier Set?

What are the main features of the VDE Plier Set?

The VDE Plier Set is made of chrome vanadium steel and undergoes rigorous high pressure testing. They feature a premium insulated non-slip safety handle and a 55-65HRC hardened cutting edge for excellent cutting performance. VDE-rated tools can be used safely when working on live wires with voltages up to 1000 VAC. The VDE Plier Set is suitable for clamping and bending wire, crimping ferrules and cutting soft, medium and hard wire. The VDE Plier Set is mainly used for cutting single-strand and multi-strand wires with thin wire diameters, as well as for bending single-strand wire joints, stripping plastic insulation, etc. 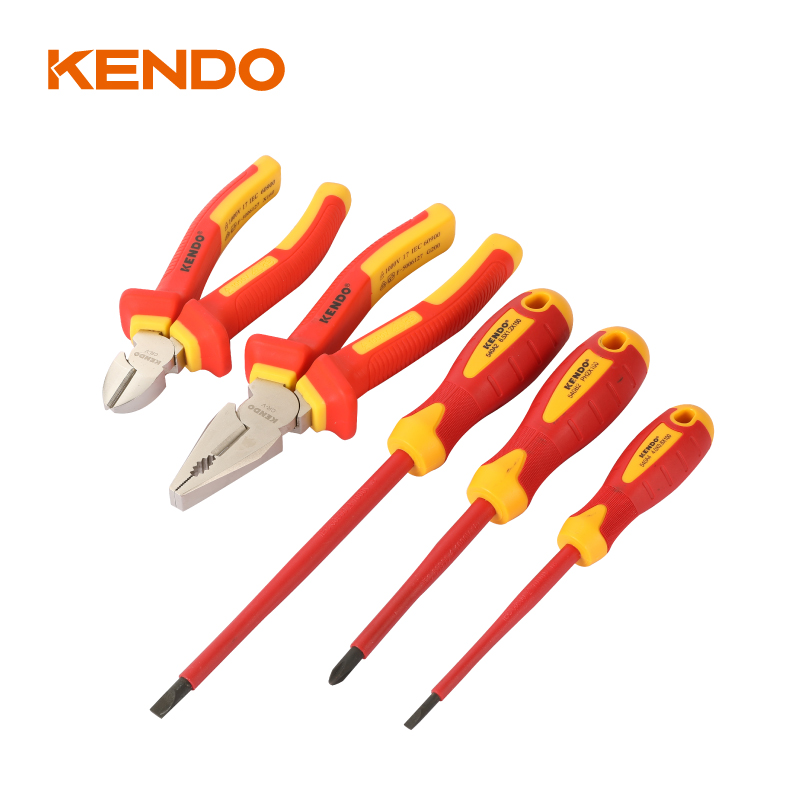 What are the main features of the VDE Plier Set?

The VDE Plier Set is composed of a pointed tip, a knife edge and a plier handle. The needle nose pliers for electricians are generally made of 45# steel, and the category is medium carbon steel. The carbon content is 0.45%, and the toughness and hardness are suitable.

The VDE Plier Set clamp handle is covered with an insulating sleeve with a rated voltage of 500V. It is a commonly used pliers tool.

VDE Plier Set is mainly used to cut single-strand and multi-strand wires with thin wire diameters, as well as bending single-strand wire joints, stripping plastic insulation layers, etc. It can be operated in a narrow working space. It can pinch work, and those with a cutting edge can cut small parts. It is one of the commonly used tools for electricians (especially assemblers and repairers such as internal equipment).

What are the usage and precautions of VDE Plier Set?

The VDE Plier Set is one of the typical tools that use the principle of leverage.

How to use VDE Plier Set and matters needing attention:

1. It is generally operated with the right hand. When using, hold the two handles of the needle-nose pliers to start clamping or cutting work.

2. When the VDE Plier Set is not used, the surface should be coated with lubricating anti-rust oil to avoid rusting or the fulcrum being astringent.

3. When using, be careful not to face the edge of the blade, put it back to the original place after use, and place it in a place that is not easy for children to access to avoid injury.

What are the characteristics of the VDE Plier Set?

The jaws of the VDE Plier Set have no cutting edges. Since the jaws have no tooth pattern, the jaws and jaws can be closed flatly. When the parts are bent, the lines of the parts are less damaged and scratches are not easily left. The pointed nose of the needle-nose pliers makes it convenient for players to clamp the buckle points of the parts, so as to perform flat folding or bending of the buckle points.

Function: Fold the trimmed metal parts into shapes and assemble them into models.